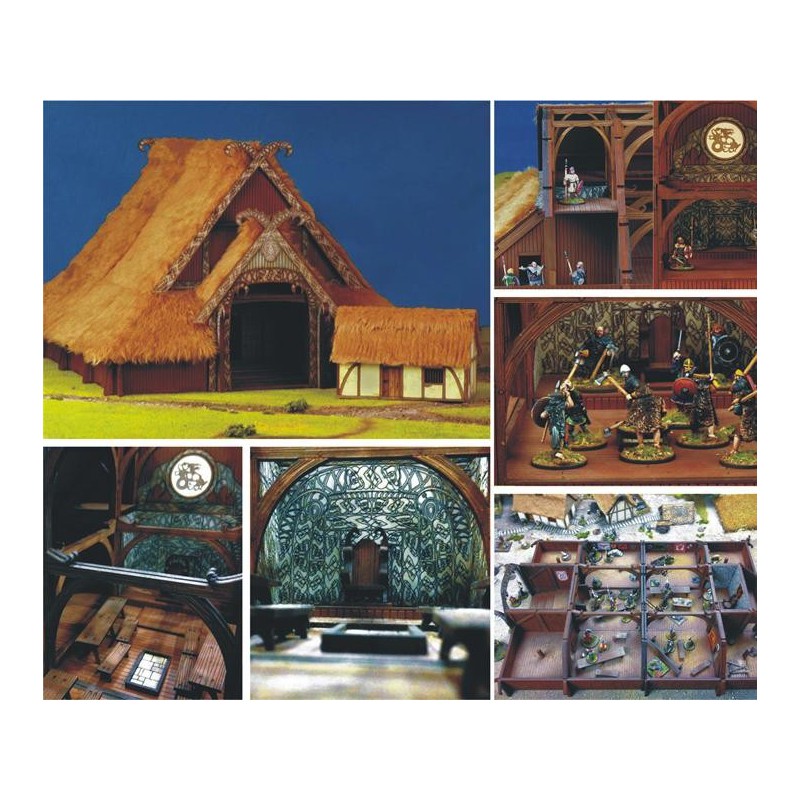 28S-DAR-111 is a ‘28Standard’ 4Ground kit, as you would expect it has loads of detail and pre-painted parts.

Heorot the Great Hall of King Hrothgar is a building from legend, the real historical Heorot is now thought to have been built near the village of Lejre, on the island of Zealand, Denmark. This is how Heorot was described in the Early English legend of Beowolf;

“The men did not dally; they strode inland in a group
Until they were able to discern the timbered hall,
Splendid and ornamented with gold.
The building in which that powerful man held court
Was the foremost of halls under heaven;
Its radiance shone over many lands”

Heorot (Hall Of The Stag) was a huge building with massive structural timber beams throughout, on those beams runes and carved beasts would abound. Such numerous carvings as these yet more of a testament to the master carpenters who built it and of course a constant reminder, to any visitor from afar, of the almost unimaginable wealth of a King who could afford to have this ‘foremost of halls under heaven’ built. Yet in such a wild and dangerous an age, a King’s Great Hall was also his castle of last defence; the great doors were built of timbers almost as massive as the beams, with no more easy access than for two well formed warriors in their prime and harnessed for war to pass within.
Heorot was so much more than just a defenceable safe haven, for it was no mere feasting hall but was a ‘Royal Ring Givers Mead Hall’, heroes from far and wide would quest and adventure in the name of such a King, knowing such rings and stout wargear gifted by this king would be splendid treasures indeed.

The real Dark Age King Hrothgar had Heorot built, but we also know his close descendant Hrólfr Kraki (another famous Danish King - most likely nephew of Hrothgar) continued to keep Heorot as his own ‘Mead Hall’. The legendary splendour of Heorot was so well known in the Dark Ages that it is mentioned in more than ‘The Tale Of Beowulf’ one of the oldest of Anglo-Saxon poems; in the Anglo-Saxon poem ‘Widsith’ we learn something of how Hrothgar with Hrólfr along side him defended Heorot against the warhost of the ‘Headubarden’ lead by legendary saga lord ‘Ingeld’, Hrothgar’s own son in law.

4Ground’s huge model of Heorot once constructed comes apart in the middle and all of the roof sections come off to allow ease of use during gaming and also facilitate easier storage when not in use.